Our district recently purchased new laptops for students to use.  I stopped by the classroom where the laptops were being stored and unpacked and was taken aback by the voluminous mountain of cardboard boxes.  Immediately, I snapped a picture, knowing full well that my right-before-Thanksgiving-break lesson plan was unfolding.

The day before break, I displayed the photo to each of my six classes using a data projector.  I also provided 2 photocopies of the picture to each group of students.  My question, quite simply, was “How many boxes?”  (We focused on the brown cardboard boxes in the photo, and decided to ignore my right shoulder!) 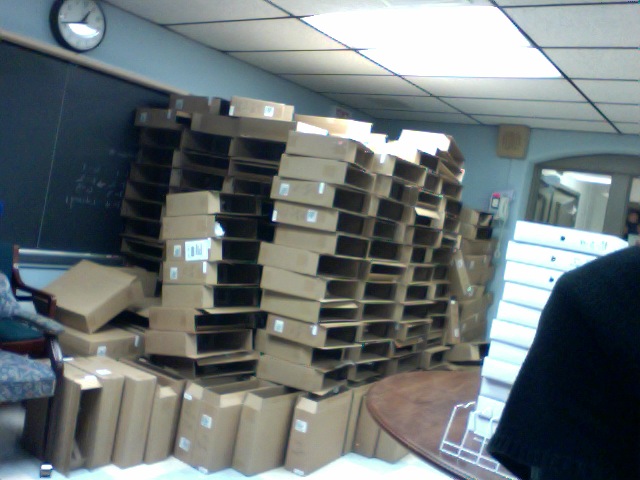 Student teams got right to work.  There’s something so exciting about presenting students with such a simple problem statement.  The room was instantly buzzing with conversation!  After several minutes, I gave each team a post-it to write their final estimate.  We came together as a class, and each group had 1 minute to justify their total.  What most pleased me was that every group in every class had specific mathematical explanations to support their final answers.  Most students took the approach of counting the number of boxes in a vertical stack, then multiplying by how many stacks they thought there were in the “mountain”.  Many groups added a few more boxes to this total, taking into account the boxes that might be hiding from view.  Some students directly related the concept of volume and the formula V = l • w • h to the scenario.  Some groups tried to actually count the boxes one by one, yet others disregarded the picture entirely, and based their totals on inaccurate assumptions, reasoning that every student in the building would be receiving a new laptop (not the case!).  Even for these students, I was pleased that they were able to justify their estimates with some level of mathematical reasoning.

So… how many boxes do YOU think there are in “Box Mountain”? 😉

Tweet
This entry was posted in Algebra 1. Bookmark the permalink.