Simple But Good: Use a Keynote Slide To Annotate and “Zoom”!

Some days, simple is good.  Today was one of those days.

My pre-algebra students have been learning about perfect squares and square roots.  After a quick perfect squares quiz today, I had a partial class period left to do a lesson on estimating square roots.  This is not typically a favorite topic of middle schoolers.  However, with iPads nearby, I tried a substitution tactic that worked well.

I chose a few examples, but placed them on a Keynote slide for some variety.  The Keynote template I chose had a dark background, and as far as I know, no equation editor allows a font color other than black.  So, I inserted a few “call-outs” with white backgrounds to house the square roots.  Next I needed an application problem – a problem about a square window?  No problem – found an image of a square window and added that to the mix.  Voila – examples we would have done anyway, on a pretty slide that we can annotate.  Saved as a PDF, whipped up a QR code, and I was on my way. 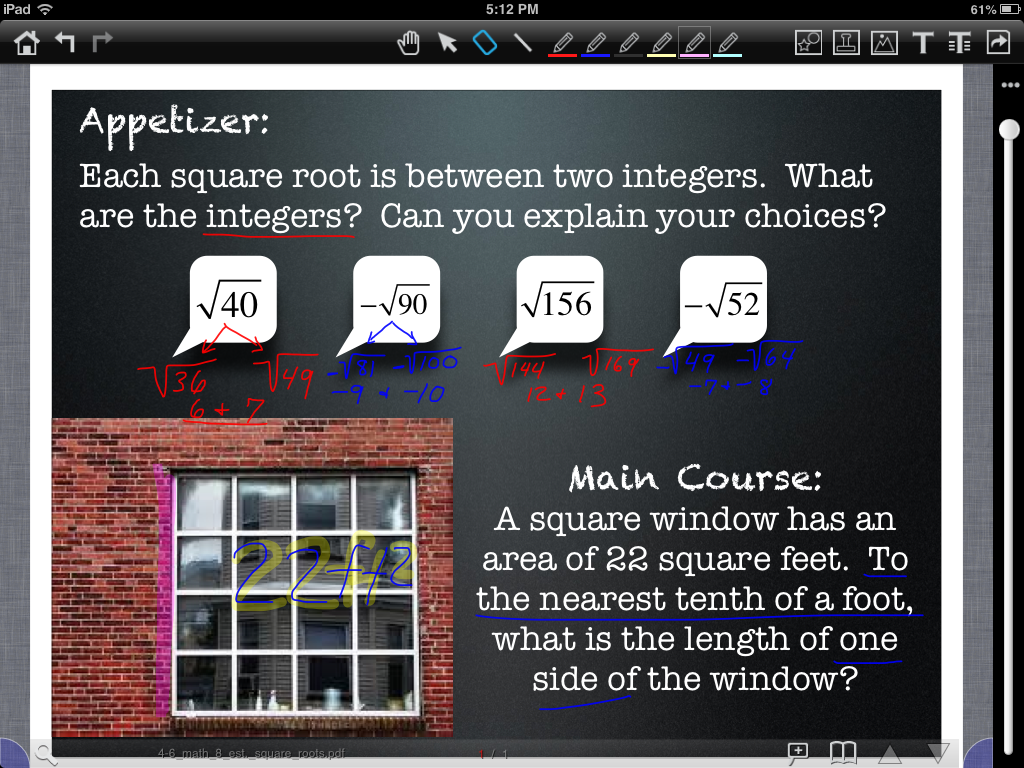 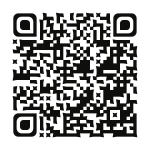 Students zapped the QR code and opened the slide in their iPad annotating app of choice (mine seems to be neu.annotate+ lately).  I guided students through each example, zooming in so that only the problem at hand could be seen.  We zoomed in and out of each “appetizer” problem, which really helped students focus as we tried the examples, then zoomed out to see the fruits of our labor.  Simple, but cool. 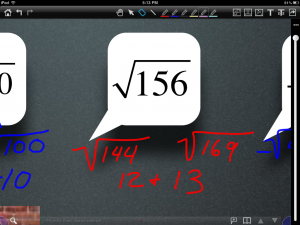 For the “main course” problem, some students chose to annotate the PDF by writing on the window.  Some of them actually used the squares in the window pic to organize their decimal multiplication work, which I thought was pretty neat.  Others chose to solve the trial-and-error problems in their notebooks,  All in all, I think this was a simple yet effective way to engage students, and annotate a PDF that wasn’t your typical “worksheet”.  The “zooming” in and out that the iPad allows is priceless – focus on what you need, block out the stuff you don’t.  Zoom in to each example later when you revisit the notes you took.  Simple things that can only be done with an iPad!

I had a visitor during today’s lesson – check out TechChef4u Lisa Johnson’s take on what she calls my “DIY Prezi” – Clever! 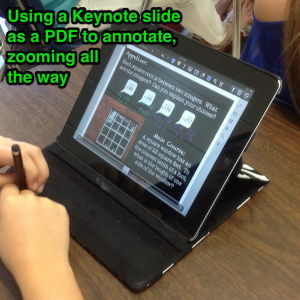 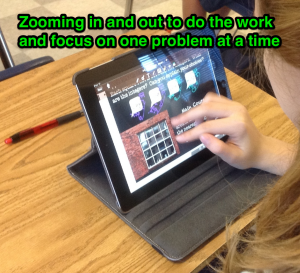 1 Response to Simple But Good: Use a Keynote Slide To Annotate and “Zoom”!