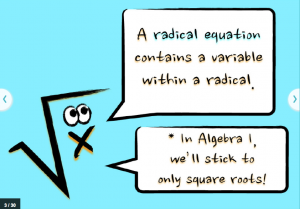 The element of “play” can be a powerful part of learning.  Several weeks ago, my 8th grade algebra students solved radical equations through a Nearpod lesson found here.  When I designed this NPP (Nearpod Presentation) I created the “radical dude” character using Keynote to reinforce that the independent variable is under the radical symbol.  Little did I know he’d get many make-overs during our lesson.

During the Nearpod lesson, students first witnessed a specific, worked-out example.  Next, students had to work out a somewhat similar example using the “Draw It” feature in Nearpod.  For the first problem or two, students stuck to the work at hand, sometimes admitting that they had just zoned out and didn’t expect to be held immediately accountable. 😉

Once students understood my lesson pattern (I do… now you do…) the “radical art” ensued.  Students swiftly solved each radical equation so that any extra time they had left could be spent embellishing the “radical dude” on the slide.  I was in hysterics, and so were they as I “launched” anonymous student work samples to all of their screens.  Yes, our priority was the algebra… but the playful cartoons made the lesson truly fun.

Enjoy this “radical art” collage, created with Canva.   It features some of my favorite radical make-overs. 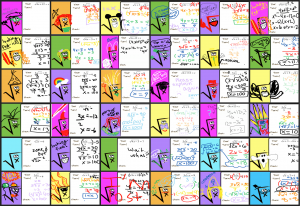 Follow-Up: I displayed this “Radical Art” on the screen at the front of my classroom today. Students went crazy!  Immediately, they crowded around the screen to find their included masterpieces.

Currently in class, we’re working on a Book Creator project, and one group chose “Solving Radical Equations” as their book topic and wanted to include this art in their eBook.  I told them to search for it here, or in my Twitter feed.  When I told them they’d been retweeted at least 11 times (at my last glance) and that they went “viral” on Twitter, there was an immediate buzz in the room!

This is what happens when you mix 8th graders, @Nearpod, radical equations, and a sense of humor. Radical art! pic.twitter.com/VdUsqTPEmT

Then one of my students found this image on Twitter.  She looked at me, completely perplexed, and asked, “MRS. YENCA!?!  WHY DO YOU HAVE *SO* MANY FOLLOWERS?!!?”