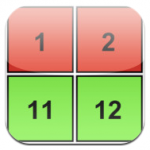 After my students finished an assessment today, I gave them a menu of math apps to explore on this fine Friday.  One app quickly rose to the top of the list – a freebie called FactorMan!  FactorMan encompasses all things that make gaming so appealing: an obtainable challenge that is just tough enough to keep one motivated to keep on playing.  I also think the sheer injustice of the game stirred up emotions in my students… and if I am being honest, I couldn’t stop playing FactorMan when I should have been grading those aforementioned assessments!

What separates FactorMan from The Factor Game is what happens at the end of the game… if the only numbers left on the board are “illegal moves” because they have no remaining factors in play, the player hits the “Done” button to end the game.  At this point, FactorMan gets to keep all of those unused points!  As students confidently pressed the “Done” button, about to claim victory, the tables turned very quickly!

“Is this game even possible to beat?”

“Is there a strategy or something?” 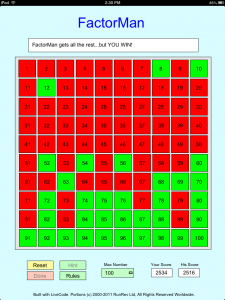 Students were determined to beat this guy, and were willing to work for it.  I even tempted them further by saying that, if they could e-mail me a screenshot of a victorious game, TODAY, then I would give them a bonus point on their test.  I had two winners!  Here’s one of the screenshots e-mailed to me from a student who left school early, but could not stop playing FactorMan at home!  Green moves were hers, and red moves were FactorMan’s: 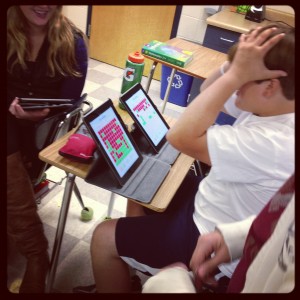 Another student defeated FactorMan by 10 points during class!  One of his classmates quickly grabbed the winning iPad in an attempt to duplicate the game… but hadn’t taken into consideration that the order the factors were chosen during the game mattered.  Here is the moment when he realized order might be important…

Determined, though defeated, he opted to “solve a simpler problem” and try playing the game with a board numbered 1-20 rather than 1-100.  His first victory pic is 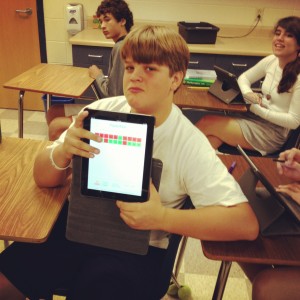 shown below with a few other images from today’s class.  Finally, a strategy to defeat FactorMan can be viewed here.  Go ahead and play just once… I dare you! 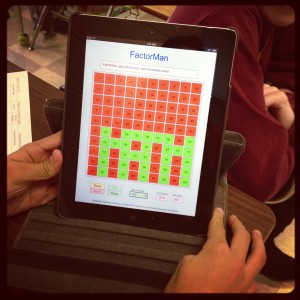 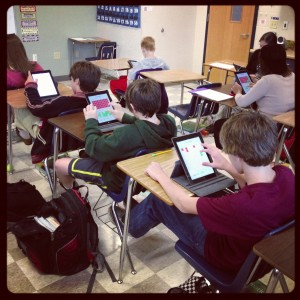 Tweet
This entry was posted in Algebra 1, Pre-Algebra and tagged app, FactorMan app. Bookmark the permalink.