I Am a Witness to Perplexity

My students have been studying ratios, rates and proportions.  We’ve compared unit prices to find the “better buy” and found the heights of trees and flagpoles using their shadows and similar triangles.  We’ve also converted rates using dimensional analysis (usually some resistance with that one).  Yes, we have done all the typical tasks in a unit on ratios.  Until today…

The task: A bizarre “price per gallon” activity I conjured up.

I “set the stage” by grabbing the water bottle from my desk, and asked, “Have any of you ever bought that colored, flavored liquid stuff to put in your water?  Is it good?”

A wave of opinions came crashing toward me, as students expressed their love for or disgust of the product.

“How much do you think a gallon would cost?”

Again, a wave of estimates, head scratching, and opinions!

I gave the students the “How Much Per Gallon?” sheet full of familiar products, none of which are typically sold in one-gallon containers. 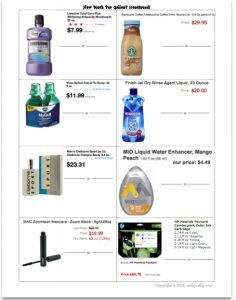 “Oooo!  My mom buys that mascara!”

We focused on the MiO Liquid Water Enhancer first, since that’s what started our discussion.  Students noted the given information about the product, specifically that the bottle was measured in fluid ounces… and our goal was to find the price per gallon.

A student who usually keeps to herself could barely contain herself.  She began rummaging through her folder and pulled out her standardized test reference sheet.  Noting the conversion facts on the sheet, she yelled, “We need to figure out how many ounces are in a gallon!  Quick!  Write 1 gallon!  Times… let me see… times, 4 quarts over 1 gallon… times…” and she proceeded to call out conversion factors so quickly I could barely write fast enough to keep up with her.  She could barely stay in her seat.  It was awesome.

Once we had agreed that one gallon has 128 fluid ounces in it, we returned to MiO.  Students eagerly helped set up the proportion:

At this point, I can only say that you had to be there.  You just had to be in the room to see how frantically the students worked to find out how much a gallon of MiO would cost.  They were desperate to finish this problem.  They were amazed that a gallon of MiO could sell for over $350.  And they could barely decide which problem to solve next.   “This is SO weird!” I heard one young man say, as he set up proportions with a smile.

I felt the energy of perplexity.  I loved it, but more importantly, so did they. 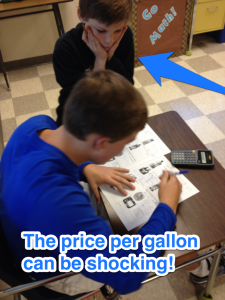 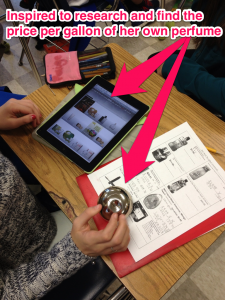 And if you every wondered how much a gallon of printer ink would cost… well, let’s just say it rivals the price of a compact car!

The activity in its entirety can be found here – enjoy.

5 Responses to I Am a Witness to Perplexity