All of my students now have an iPad!  Students received them last week, and what an ordeal it was!  “Excited is an understatement” one of my students exclaimed as she sat in her desk, hugging her brand new, empty iPad case, waiting to be called up to seize her prize.

I tried a mini-lesson to help students get to know several essential apps today.  Students have been solving one-step equations, so I wanted to give them an application problem to set up and solve, using the iPads. 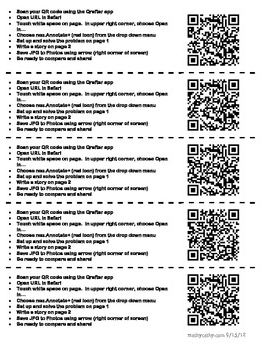 I took a problem-solving task I had copied on paper in the past, and uploaded separate pages as PDFs to the web.  Using qrstuff.com, I created unique codes that linked to each of the five different problems.  In class today, students each received one of the possible five QR codes, and used the free Qrafter app to scan them.  Next, students opened the PDF files in neu.annotate+ PDF to set up and solve the equation.  Finally, students saved the problems on their own camera rolls to reference later.

Though this task only took 10 or so minutes of my class today, it took me several hours to organize and implement.  Though photocopying would have been much faster (for the students as 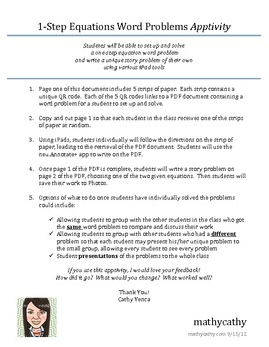 well as for me) I still felt like the task was worth the trouble, because students learned about QR codes (which I plan to use quite a bit) as well as how to annotate on a PDF file.  It was neat to see how some students preferred to type on the PDF, while others were quick to grab a stylus and start writing, circling and highlighting, and others just used their fingertips.  All in all, every student was engaged and on task, and the time investment has been made, so tasks like this later on will be more efficient for all parties involved, including me.

Click on the preview images to get your own copy of the QR codes which link to the problems we set up and solved.

I’m pooped, but I can say that today, I took a baby step!

Thanks to TechChef4u Lisa Johnson for featuring this apptivity on her blog!