I can hear the announcer at our high school’s football game as I type on my iMac here at home.  So nice to be getting settled in to a “new” house that is closer in to the city, our schools, and the general action of this fine town… especially as far as traffic is concerned!

You’d think spending WAY less time in Austin traffic would somehow afford me some time back… and yet, sitting down to reflect and exhale has still been tough to do.  I have to grant myself some grace, as it’s still September… and things will settle down… right? 🙂

This is year two with new TEKS for me (Texas standards, for those who follow the CCSS or other such standards).  Last year, Texas students in grades K – 8 took on new, more rigorous math standards, and new textbook resources.  This year, Texas students in high school math courses are enduring the same transition.  It’s a blessing to have had half of my teaching schedule impacted last year (my Math 8 students) , and the other half this year (my Algebra students), versus having my entire teaching schedule shift all in the same year.  Lesson planning and designing new resources and assessments is both exhausting and refreshing.  So that’s how I feel this fine Friday – exhausted and refreshed, if that’s even a thing…!  That means, it’s time for another hodge-podge post!  So… what’s new, you ask? 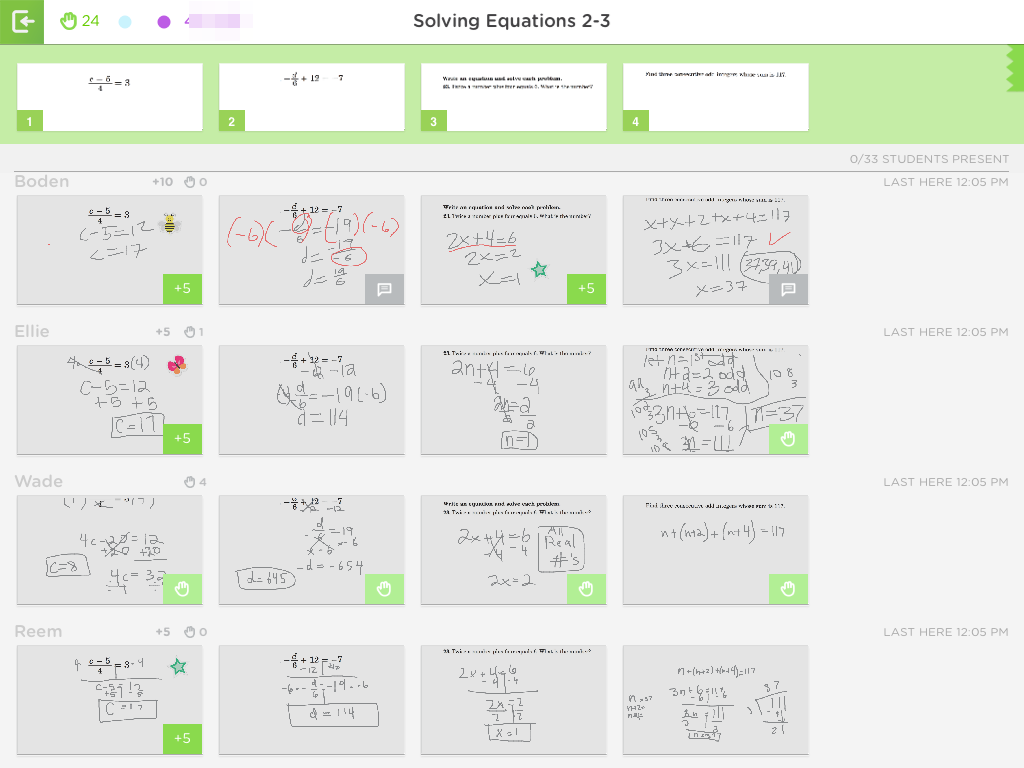 This week, my students went pretty bonkers over an app I’ve been meaning to try, as it seemed to have great potential for problem-solving.  I didn’t even realize it’s been almost exactly a year since Dan Meyer blogged about it until I began drafting this post tonight, but that’s where I first heard about Classkick.  It’s an iPad-only freebie that allows students to work at their own pace as the teacher looks on from his/her own iPad screen.  As students work, the teacher can see real-time thumbnails of student work… from each and every student.  Kiddos can raise a virtual orange hand to ask for help (the little icon appears on the teacher’s iPad) or raise a virtual green hand to ask the teacher to check their work.  The teacher can provide written feedback in real-time on the screen as well… which totally freaked out my students!  They wigged OUT (in a good way) when I started giving verbal feedback from across the room while my writing appeared in ghost-like wonder on a student’s own screen simultaneously!  And… you wouldn’t believe how hard a group of 8th graders will work for even the *chance* that they might receive a digital sticker from me on one of their work pages.  I am not even being the slightest bit sarcastic… I really mean it! 🙂

What was interesting to me is… with a class of 31 students… there was NO POSSIBLE WAY that I could thoroughly check EVERY student’s work on 4 problems, in detail, in the time it took them to try the problems.  (Sheesh, even a second glance at the screenshot I shared above includes some interesting misconceptions that I wasn’t able to address during class… and this only shows work from FOUR students!) That didn’t seem to impact their motivation… just the *chance* that they could receive written feedback, or a digital sticker, seemed to keep them gung-ho about dare-I-say pretty typical multi-step equations problems (consecutive integers, for example).  What was even more fascinating is, if students so much as witnessed me giving a nearby peer a sticker or written feedback, they were as pumped about using Classkick to solve some equations as though the feedback had been given directly to them.  The novelty of it all made the room buzz, and they even begged to do homework using Classkick!  While I wasn’t quite ready to grant that request on the fly, I later learned through interactions with Classkick on Twitter that it can be used asynchronously as well.  If I wanted to go and give detailed feedback to every student on every page of digital work, I could do it right now, and they’ll see it all the next time they log in with the code they got from me in class today.  (BTW… there is NO teacher prep to get kids to log in to Classkick – it generates a code, you share the code with the kids, and they appear in your class.)

If you give Classkick a try, I’d love to hear about it!  Granted, it will be overwhelming.  All of the kids will want your immediate digital attention.  And that’s okay.  Don’t *NOT* use a tool because of your own limitations as one human being.  Give it a try, give as much feedback out as you can muster in the moment, and decide afterwards if giving more feedback later (asynchronously) is worth it… or if you just grant yourself grace to do what you can in class, and know that this is one experience among many when your students will be providing you with a formative work sample.

I haven’t tried a seemingly nifty feature that permits students to anonymously give one another written feedback.  It’s only September, and I feel like I need to get to know these folks a bit more before giving them that kind of power.

Next week, I’m looking forward to giving Zeal.com a try.  The folks at Zeal were kind enough to give me a private tutorial over the phone this past week, and I think their platform has great potential for progress monitoring!

A big thanks to the @gotzeal folks for talking me through their new & improved platform for giving “exit tickets” & monitoring S progress!

In other news, it was a thrill to recently be interviewed by the folks at NBC in this back-to-school feature!  Having a reporter from New York contact me out of the blue was quite a compliment!

Thanks to Lisa Johnson’s visit to my classroom during one of Eanes ISD’s iLeap Academy site visits, she kindly featured my students and some classroom strategies in this Edutopia article, which was published today.

Honored to be included in this article, which includes many ways Nearpod can be used effectively for professional development and in the classroom.

4 Responses to Gettin’ Into The Groove Hodge-Podge… Featuring Classkick