Using Desmos on iPads… for the STAAR Test… Really!

(with the help of Casper Focus)…

You made a liar out of me.

Did you catch that?  When asked, “What about calculators… did the iPads replace your calculators? Or do the kids need those as well?”

I actually said, “The answer is no, because of testing.  They’re not going to be allowed to use an iPad calculator in standardized testing… there are some neat apps and websites like Desmos… but it’s never going to replace that calculator… we have to get comfortable knowing the iPad is not going to be present when you have to take a test.”

Isn’t it amazing that a task that was thought to be impossible was accomplished so quickly with gusto?  It’s true – my Math 8 students were among the first… in the world perhaps… to use their iPads on a state assessment.  Not only does this year mark the first opportunity for Texas Math 8 students to use a graphing calculator on state tests, but our students had the option to use a TI graphing calculator… or Desmos on their iPads… or both tools!  The process leading up to STAAR testing day was paved with preparation and practice, and it paid off.

Our Director of Innovation, Carl Hooker, shares details in this post of all the technology preparation that had to happen both behind the scenes as well as with students through several “test runs”.  Using Casper Focus, student iPads had to be “locked down” in a version of Desmos that was standardized-test-friendly.

This meant that the Desmos we all know and love had to be stripped down a bit.  I was honored to be part of the process of helping advise ways to tweak Desmos to be a test-friendly tool, resulting in the FREE Desmos Test Mode app.  The folks at Desmos are such a pleasure to work with, even responding to a passionate student of mine who contacted them in hopes of employment with Desmos some day!  Yes, one of my 7th graders loves Desmos SO MUCH that he’s looking for ways to connect with them already.  Thank you, Desmos, for responding to him and acknowledging and encouraging his excitement!

If you’ve read Carl’s post, you know the background process.  Now that testing day has passed with success, I decided to follow up with my students to ask a few questions about having access to both TI calculators and Desmos Test Mode on iPads.  In terms of instruction, and knowing that students would have the opportunity to use both graphing tools on the STAAR test, I did my best to encourage the use of both tools throughout the year.  Together, my students and I aimed to learn to use each tool effectively, as well as make wise decisions about which tool was best/most efficient to use for each mathematics topic we studied.

Using Socrative to gather quick feedback, I first asked students which tool they prefer to use.  The results surprised me!  With both tools in hand all year, I was sure most students would say they liked the tools equally… well, that didn’t happen! 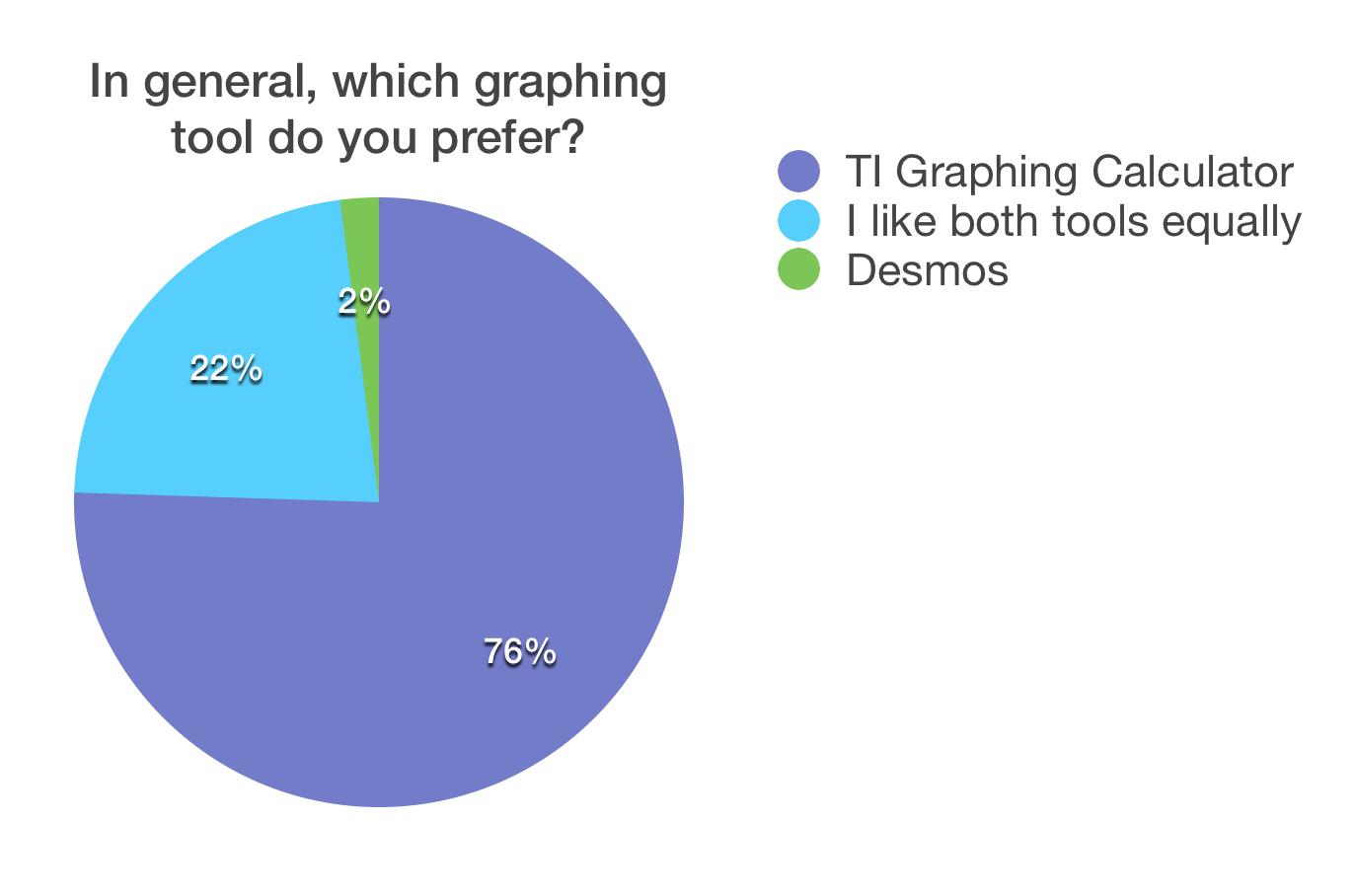 I also asked students to provide me with a list of lesson topics for which they preferred the TI calculator over Desmos, and vice versa.  Here’s a spreadsheet of their (anonymous) responses.

Perhaps these iPad STAAR Test trailblazers’ feedback will help Desmos continue to improve.  For now, at least with my tiny sample of 49 students, it appears TI still has a strong role… even in the 1:1 iPad classroom.

Thank you, Ed Surge, for chatting about Desmos Test Mode and featuring our excitement here. 🙂

15 Responses to Using Desmos on iPads… for the STAAR Test… Really!